Staying True To My Younger Self

I apologize ahead of time, this post is going to ramble, but come together at the end. If you have a busy day you may want to save this post to read later…

I recently shared a post on Facebook about an aspect of writing that all writers go through, rejection. In this digital age we get rejection emails instead of letters, and my mailbox was filled with them. I’ve been getting a lot of them this year. Even when you know this is a part of the process, it is still hard to deal with right at that moment, or in my case, so many at one time. And some of them hurt more than others for different reasons. The grand prize for one contest I entered was to speak about poetry to students at colleges. I thought that would be cool.

I was thankful for all the responses from family and friends on Facebook telling me to keep writing. To stay true… which brings me to a YouTube video.

“Dream On” by Video Advice is one of those motivational videos that mash up  different speeches with video clips, mostly from movies. This video’s audio starts with a quote from Nassim Nicholas Taleb’s Commencement Address at the American University in Beirut:

As you think about that for a moment, let me share what my word of the year is: 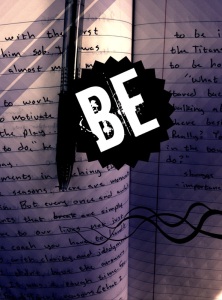 The idea behind that word was for me to BE a good father, to BE a good husband, and to BE a writer (yes, I hear Yoda, too). Instead of trying to do these this year I am going to fulfill those roles, which highlights the Facebook post, rejection letters (emails) are part of the process of being a writer. Especially since it has been awhile since I have actively pursued getting my work published. I have to be ready for those setbacks.

What I find most empowering about his idea is how Nassim Taleb flips the idea of looking back on our lives. The popular idea is to give advice to our younger selves. Heck, there’s even a web series where athletes write back to their younger self (The Players’ Tribune). Let alone the popular songs and such.

But Nassim Taleb flips the idea, asks us to consider if who we have become would make our 18-year-old self proud. Did you fulfill the potential you held at that time? Did you pursue your goals? Did you live up to your own standards?

And as I worked to publish the 20 Year Anniversary of my first book of poetry And I Never Told You, I came to realize as a poet, as a writer, that I had let myself down. Not that I ever stopped writing, but I let that part of me fall to the bottom of my priority list. As Nassim Taleb states, life corrupted me.

Corrupt might be a harsh word, but still true. As I read through other poems to add to the book, I noticed how the poems had more passion. They were raw, even undefined at times, but the poems represented my troubles and joys authentically. My poetry now is stronger in form and still reveals depth of emotions, but maybe not so openly. The poems have a guarded feel, more layers to get through. I’m not saying it is a bad thing, some of my favorite poems are from the last couple of years. What I hope you understand is how life has changed me to be more guarded in my works, to be more guarded in my everyday life. The irony is that I still feel the same pain.

Nassim Taleb’s quote seems to hint that life corrupts us with money, status, and things like that. But life can corrupt us with fear, pain, confusion, and simple busyness. What bill is due this week? What time is the dentist appointment? These things can blanket our dreams and even our hearts.

So I am making my younger self proud by BEing the poet and writer that I wanted to be. I know there will be rejection letters and other hurdles.  How about you?  What could you do today that would make your younger self proud? It doesn’t matter how old you are now, what matters is that you can pursue your goals at any time. Let today be day one of your success story.

9 responses to “Staying True To My Younger Self”

This site uses Akismet to reduce spam. Learn how your comment data is processed.