I am still amped-up. Less than 30 minutes ago I was almost in a serious accident. 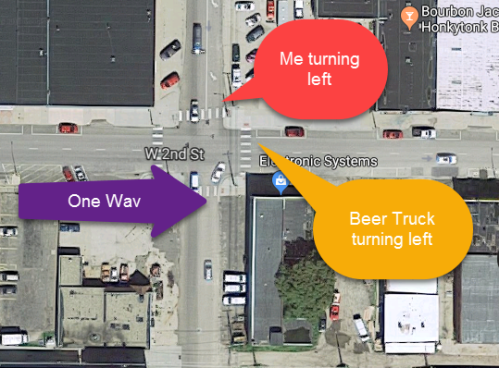 This is a diagram of downtown Hastings, which has a number of one way streets. Second street is a one way street (west to east) downtown. I had to drop off some mail at the post office this morning. I was heading south on Colorado, which is one way also. There is a light at the intersection of Second and Colorado, but it only faces the traffic flow of the one way streets. I was half a block away from the intersection when the light turned green. My lane has a green arrow (Colorado turns into two-way traffic after the light) and I slow down a little to make the turn. The roads are still snow packed from the snow storm on Sunday. That’s when I notice the headlights of a beer truck coming the wrong way on Second street, right where I am supposed to turn.

I wish I could tell you everything slowed down in my mind and I handled the situation like a hero. It didn’t. I remember everything now. But at that moment everything seemed to move into hyper drive.

I could see the truck’s left turn signal blinking on the hood of the truck. I remember thinking in my head, “What is he doing?” because he doesn’t seem to be stopping. There is no traffic light for him because he is traveling the wrong way on the Second street.

Decisions. Choices. Sometimes we see the results of our decisions immediately. Sometimes the effects of our decisions manifest themselves later; maybe a minute, a day, a year, or sometimes never. Making a decision can be a heavy responsibility… in fact every decision we make actually creates the life we live. And most of the time our decisions affects other people’s’ lives. I don’t know when the driver of the truck decided to drive down the wrong way. I don’t know why he chose to do it. Maybe he didn’t want to navigate the extra turns it takes to get through all the one way streets downtown, so he decided to take a short cut. What I do know is that his decisions and my decisions (to drop of the mail and drive down a certain street) was about to meet at the intersection of Second and Colorado.

I decide not to slam on the brakes to try to stop. The intersection was snow packed and helped me in this case. I was able to drift into the right lane on Second street. Missing the truck who also decided not to stop and turned left onto Colorado to drive away. I came to a stop to watch his taillights disappear at the corner of a building.

Decisions. Choices. Some of them seem more important than others. But in reality, every one of them matters. Everyone of them makes an impact in our lives. Makes an impact on other people’s’ lives. This morning I am glad that the driver’s choices and mine did not collide, literally.

3 responses to “Decisions in Seconds”

This site uses Akismet to reduce spam. Learn how your comment data is processed.