What are the Words?

A few weeks ago I attended an online education conference. The keynote speaker shared some information that got me thinking. He said that the use of the word “Love” had been decreasing in music. He did not provide any reference for this information. I tried to find a source to collaborate what he said. I couldn’t, but it still got me thinking because I use pop culture in my classes to make connections for the students. So, I decided to do an unofficial analysis of the top three songs from 2020, 2010, 2000, 1990, 1980, 1970, 1960, and 1950 according to Billboard’s Year End Hot 100 chart. I thought the top three songs from the years listed would give a good snapshot of what was popular at that time.

I created word clouds from the lyrics of the top three songs for the year. The most used words are larger in size. Stop words were automatically deleted (this was a challenging decision because these words were used in titles, but using them cluttered the word clouds). I removed all words that only appeared once in the songs. I’ll start with the word cloud, list the top three songs, and then share my insight briefly. Again, this is an unofficial look at these songs, but it is worth thinking about. Let’s start with 1950.

It is obvious that names are the most used words in this word cloud, especially since one of the songs was an instrumental. “Lovely” does appear in the list.

1. “Theme from A Summer Place” by Percy Faith

3. “Cathy’s Clown” by The Everly Brothers

“Love” is a main word, but not the most used. The overall feel of the word cloud is about relationships. I find it interesting that we have a name again as a main word.

3. “American Woman” by The Guess Who

This word cloud is tough to get a general feel for because the top three songs are so different in theme and style. The word “love” does not show up in any form.

2. “Another Brick in the Wall, Part II” by Pink Floyd

Knowing the songs, I was surprised that the words “brick” or “wall” were not more prominent. But “love” appears as a main word again, even with such a diverse group of songs.

1. “Hold On” by Wilson Phillips

2. “It Must Have Been Love” by Roxette

3. “Nothing Compares 2 U” by Sinéad O’Connor

These songs had a similar vibe, which actually made for a smaller word cloud. “Love” is present now in three out of five word clouds, four if you count “lovely” in the 1950 word cloud.

“Love” makes it into the word cloud (I did not place it in the center). Funny how Santana owned the year 2000, his name is a prominent word in the word cloud, too.

2. “Need You Now” by Lady Antebellum

This word cloud is filled with a variety of words, but “love” is not one of them. The songs range in topic and style, which presents a mumbled visual. I did notice that there are now words like “drunk” and “party”. Not that these words have never been in a song before, but these are the top three songs for that year.

1. “Blinding Lights” by The Weeknd

“Love” makes it into the word cloud, but what you don’t see in this visual may be of more importance. This is the first word cloud that I deleted derogatory terms and the F-word.

This is an unofficial look at the lyrics of popular songs. It is by no means meant to make a blanket statement about music or our culture. But it is worth thinking about because words have power, and our kids are singing these songs, making TiKTok videos to them. Pop Culture delivers a message to our society. Songs are part of that message. What are your thoughts on what you see happening with lyrics over the decades? 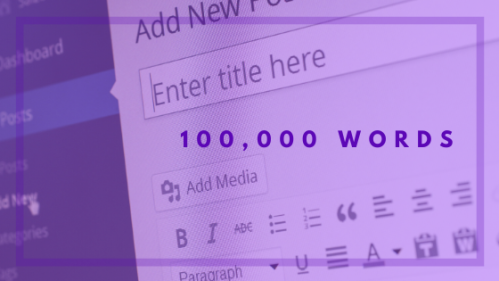 It Is All Connected. My little corner of the internet where I have spent seven years writing about life. I hope I have inspired readers, made them laugh, and maybe think about things at a deeper level. In a few lines I will hit a crazy milestone; 100,000 words on just this blog. (I do have two other blogs.) I know it is cheesy, but I wanted a certain word to be that 100,000 word, while also reminiscing about my writing journey. I have about ten words to that milestone, the word is…

I considered lots of words to be the milestone word. Words that reflect what I believe, what I do, who I am. But, in the end, the word WHY reflects a central idea to my life. Answering the question, understanding my reasons for doing things has given me a clear, yet still difficult, path to follow in my career, family, and personal life. Now that I have passed that milestone, let’s look back and discuss WHY I write.

This blog has been an adventure. 2012 was the second year of this blog and the highest word count: 21,183, yet only one like for the whole year. Last year, 2019, was the highest year for likes: 281. In one way, not very impressive. I only have just over 8,000 views total for my blog. In our social media culture this means I am an unknown. Yet, I know that people have read my posts.

First, I just have to. Writing is the lens I see the world through, especially my poetry. (You can read all my poems I wrote for the Poetry Month Challenge at my creative writing blog.) I have notebooks filled with poems. I understand the pain and joy of this world through the written word.

Which then brings me to the second reason I write, to connect with people. Every writer wants to know that someone has enjoyed their works. It means that a part of the writer has made an impact with another person in this world. That is a powerful thing. I hope my works have inspired, moved, enlightened others. Simple as that.

The final reason is that writing, creating, is fun. I love the process of creating a blog post. Creating a header, finding a video, deciding on the layout. It brings me joy, even when I write about the hardships of this life.

Here is to the next 100,000 words. And thank you, to you reader. Whether this is the first post you have read, or the hundreth, I am glad we could connect.