For all the hours I’ve spent on the road, all the years living in Nebraska and Wyoming, I have never hit a deer or an antelope.  I have had a number of other car accidents, but I’ve always spotted the deer while driving before anything bad could happen. Until this morning…

Right now, it is completely dark for most of my commute.  This morning the moon accompanied me on my drive. I was in between Doniphan and the interstate (as the picture below shows).  Things were going fine, music on, cruise set, and I was checking traffic to decide when to go into the left lane so I could merge onto the interstate.  I just crossed the bridge when the deer appeared. 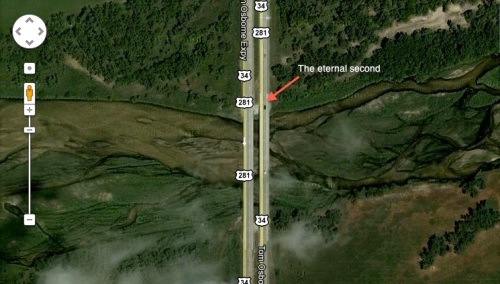 I was still in the right lane when the deer appeared on the passenger side, just in the fading part of the headlights. Both of us were caught in that eternal second. Because of the light the deer looked like a ghost, faded, almost transparent.  I could see his head snap back and his black eyes widen.  I swear his expression was, “What the….”

I did nothing. Which was the best thing. The deer and I caught up with time. It seemed my car lurched forward to do it, getting ahead of the deer to miss him.  I looked into my review mirror but could not see if he crossed the road or not.

No matter how much we try, we cannot control Life.  We have control of our attitude, or work ethic, and our smile.  But Life, it is like a box of Ping-Pong balls dumped out on a concrete floor.  We will get knocked around, sometimes drastically.  This got me thinking about dictionaries…

As an English teacher I forever get the question, “How do you spell that?”  I would always respond with directions to the bookshelf where the dictionaries sat waiting to be opened.  Even when my students had computers I would get that question.  At a time when answers are sometimes just a click away, why did my students still ask that question?

I think part of the shift we are experiencing, in school and our own lives, must include the ability to react (or know when not to in my case) to Life.  That is a grand statement, but I’m not sure I have had a whole day where something didn’t go wrong.  Where a Ping-Pong ball didn’t knock something off track.  Or a deer run out in front of you.  Are you prepared to react, to adapt?  Are students prepared?

The most important lesson I’ve learned was best said in the above quote, “Love is the only rational act.”  At first it seems like a basic feel good quote, but it is deeper than that. Love is the only RATIONAL act. Love has a strong image link to the heart and emotions, but Morrie connected it to our head and thinking.  Put simply Love produces positive results, it works. It makes sense as a founding principal for our lives.

My kids respond to Love better than to me yelling.  The waitress who is having a rough day responds better to an understanding comment from me.  A smile trumps a frown in the classroom.  I feel energized when I am involved in activities I love. Love works.

Living out this idea is not easy with the everyday stress we experience.  But I’ve noticed that a negative reaction may solve a problem right then, but causes more issues later.  While living out Love takes patience and even at times makes the current issue tough to get through, the long-term benefits are positive. It takes real strength, an intentional spirit, and an open heart, but living out the idea of Love makes all the difference. It is the rational thing to do that leads to an emotional filled life.

Bonus, because I love music I made a small playlist of songs that reveal an aspect of this idea. Enjoy.

During a conversation with a colleague, the idea of motivation in the classroom came about.  This discussion coincides with some ideas I have been thinking about regarding how we reach our students.  So, I am going to try to express a complicated web of ideas with the center being motivation.

As a teacher I have been frustrated.  I have stood in front of my room looking out on my students’ faces talking to myself, “How do they not see how great this book, or poem, or lesson, is?”  Sometimes, as teachers, we take for granted that everyone knows how powerful learning is.  But if we look at popular culture, it will remind you that they don’t.

Idea one: The Mountain

Let’s use a metaphor for a second. If we view education as a mountain, we understand that to see the spectacular view from the top we must climb.  And that climb is hard at times.  Even an expert mountain climber (or a well educated person) needs a hand to get to the top.

Image by Pete Linforth from Pixabay

Sometimes we need to remember that our students haven’t made this climb before.  Sometimes we have to reach out to them and show them the way to the mountaintop.  The view is incredible; they just don’t know it yet.

What if the classroom was more like practice?  Take a second to think back to what practice was like for you. How many times did the whistle blow?  How many times did coach go off on some kind of motivational rant?  Sometimes coach got on your case, other times a “nice job” was all it took to keep you going.  You were pushed, you were challenged, sometimes you were down right dog-tired yet felt great.

What does a typical classroom look, sound, feel like?  I understand the difference in the environments, but why can’t we match the energy of practice to a classroom?  The techniques and tools are different, but not what motivates a person.  In an interview on Focus on the Family for his book, coach Joe Gibbs stated that a good coach finds what works with his athletes to motivate them, be it a challenge or a simple comment like “good job.”

Everybody needs motivation; I found it as a coach when we successfully performed on the field.  As a teacher I found it in the light-bulb moment.  We all need motivation, a helping hand.  Not because we don’t know of the importance of our jobs, but because sometimes the climb is just hard.  And we forget what the view is.